"- You many not redistribute this route in any form, either electronicaly (Internet, e-mail, forums, etc.) or through the use of physical media (flash memory storage, optical media, etc.). The only source of distribution for this route as of 08/09/2011 is www.smmdigital.net."

This is straight from the manual folks. Just because there hasn't been a new release of the route doesn't mean that there hasn't been updates to it, or that it will never be released again. If we start disregarding any content creators requests then you are breaking a trust, and maybe it will come back to bite you in the end.
Posted by PapaXpress at 4:34 PM 2 comments:

As the previous post states "someone else has expressed interest in blogging about the route, so i'll turn duties over to them."

... if you haven't guesses that person is me.

The Atlanta North Project is still in the good hands of RCAP et al. I am simply adding web monkey to my list of duties.

Expect changes to this spot as it starts to gain its own character. My own The Grade Crossing site didn't really evolve until a few months elapsed, but I now that I understand the tools better I am sure this site will gain some character quicker.
Posted by PapaXpress at 11:38 PM No comments:

My internet site host, 1and1.com, is run by a bunch of people who are apparently sloppy at keeping up with the "paperwork" needed to run a business. Last fall, I cancelled a (customer) site that had two months left in the contract and removed it from the internet. 1and1.com marked the site in their register to be deleted from their system at the end of the contract period and even sent me an email confirmation of this. But at the end of the contract, when it was supposed to be cancelled, they billed me again for another six months. If the site had still been active, that would have kept it online through June of this year. I complained to my payment provider, who immediately blocked 1and1.com from doing this. Then I called 1and1.com, and their service rep insisted that the site was indeed cancelled and that they had never invoiced me. I thought the issue was resolved, until I got a letter this week threatening collections against me for not paying for the site under it's current billing contract.

An hour long call to 1and1.com customer service, followed by a lot of holding and record digging, finally resolved the issue about the old website. But being that this is the second time this sort of thing has happened, I informed my payment provider to permanently cancel my payment contract to 1and1.com. I then offered to pay 1and1.com for this site by check and slow-mail, to which they responded "piss-off, we don't do checks, credit only". My response was that if 1and1.com can't keep up with their own paperwork, they won't be trusted to put their hands into my bank account where they can take money at-will.

So in short, the atlantanorthproject.net site will soon be offline for good. That does not mean that work on the route is being cancelled. Already, someone else has expressed interest in blogging about the route, so i'll turn duties over to them. Roll on!

And by they way, I can't recommend doing business with 1and1.com internet site hosting.
Posted by PapaXpress at 11:26 PM No comments:

Sometimes, building a route moves at a steady pace. Sometimes, it moves like molasses. I'm in the middle of the latter time right now. I've come to an area of the route where almost every building is a truck terminal or junkyard. Since the last RCAP package, we have plenty of semi-truck trailers. We also have a few freeware industrial assets from a scattering of third-party providers than can be used as terminal buildings. However, semi-truck tractors are still lacking in the game. There is one, a "lorrie", as the Brits call them, but our goal is to avoid using default assets. So, back to the 3D modeling software we go to come up with a few generic tractors that can be used on just about any modern route. Once in the game, they can eventually be added to the traffic ribbons to simulate busy highways and interstates. 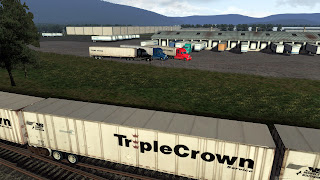 March 1, 2013 - Scenery work complete on the Alton Park area inside of the "Loop" - the area within the railroad tracks between Lookout Mountain and Interstate 24. Work has been temporarily put on hold to construct assets.

When the Atlanta North route eventually is made available for download again, it will have a new look, new operating possibilities, and a new name - The Southern Rails Route. In hindsight, naming the route the Norfolk Southern Atlanta North District, while obvious, might not have been the best idea. Having the Thoroughbred of Transportation's company name in the title might imply to some that the route is sponsored by the Company. Now granted it is unlikely that Norfolk Southern would come after a small time freeware route creator, but lawyers are a dime a dozen and litigation here in the United States is as natural as taking a nap. Also,in addition to the fact that the route actually starts on CSX's Tennessee Division Memphis-to-Chattanooga line, more of the Western & Atlantic Subdivision will be featured in the upcoming release. Finally, some folks may have become attached to the older version of the Atlanta North, and these people would probably quite vexed if the new version overwrote the older copy that they have spent so much time tweaking scenarios for.

The new name removes the possibility of corporate conflict, describes both routes in the context of their geographic location, and allows both the NS_AND and the Southern Rails route to exist side by side. However, I think that once you see the new and improved version of the route, you will prefer it over the older one hands-down.

In the previous post, I mentioned a timetable for release of the Southern Rails route. After further consideration, there will be no release, either partial or whole, of the route until after future versions of the RCAP packages are released. After working the route for a couple of weeks, it is very apparent this is going to be almost like building the route from scratch, so it's going to take a lot of time, and more assets than we currently have to get the job done. I can assure you though that it will be worth the wait. 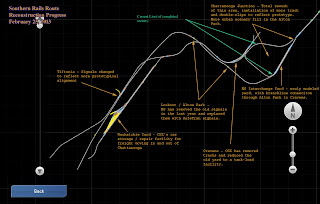 Posted by PapaXpress at 11:29 PM No comments: